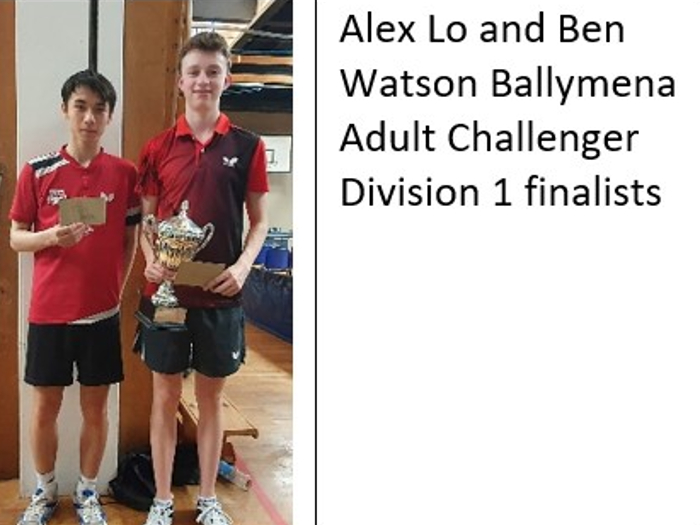 Ballymena TTC launches the celebration of 100 years of table tennis in Northern Ireland.

In the forthcoming 2022 -2023 season, Ulster Table Tennis will be celebrating 100 years. This significant anniversary will be celebrated throughout the province with a series of tournaments aimed at all levels of ability with particular emphasis on increasing participation especially among women and the disabled under the rallying cry “a sport for life, a sport for all”.
Ballymena, a one-time hot-bed for table tennis, was given the honour of kickstarting the celebrations with the local Ballymena Table Tennis Club hosting the Ballymena Adult and Junior Challenger in Ballymena Academy’s gymnasium. Over sixty table tennis enthusiasts from all over Northern Ireland travelled to take part in the event which commenced with an impeccably held two minutes silence to honour the memory of the late Queen Elizabeth the Second. The first round of matches then started at 10.15 am with the four finals being completed just after 6pm.

Ballymena Table Tennis Club will be hosting the prestigious County Antrim Open on the 5th November with the Ballymena Open scheduled for the 28th January. The Ballymena Club has 12 tournament quality tables and three coaches amongst its members. Anyone interested in playing table tennis, irrespective of age or ability, would be made most welcome at the club. It meets each Tuesday at 7.30pm in the Ballymena Academy gymnasium. The Club is holding an “open night” on the 27th September so feel free to come along for a chat and a game or two of table tennis.