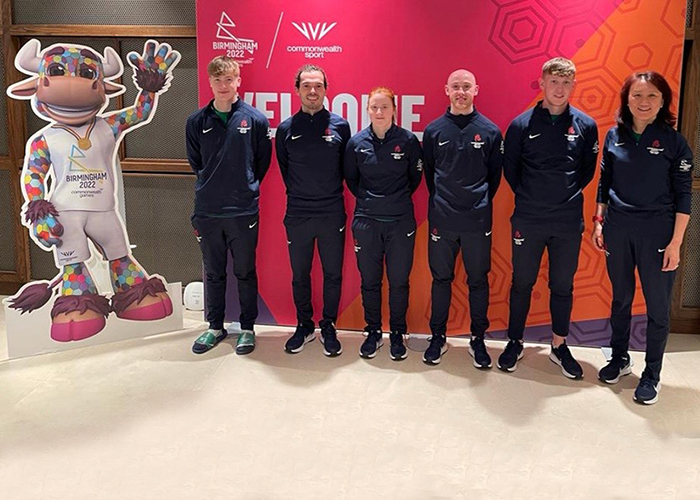 Commonwealth Games is one of the most prestigious competitions for our players. Following many phone calls, emails and meetings and with full support from CGNI, a Men’s Team (Paul McCreery, Zak Wilson, Owen Cathcart and James Skelton) and one Women’s individual player, Sophie Earley were selected to participate in B2022.

The Men’s Team had a very tough draw, meeting India and Singapore in the group stage. There were some close games and matches. Owen Cathcart fought hard, but closely lost (2-3) to Indian No. 2 Hameet Desai who is ranked World no. 124. Our team lost to India and Singapore 0-3 and beat Barbados 3-0, finishing joint 9th in the Team event. India and Singapore were the ultimate gold and silver medallists at the Team competition in B2022.

After a few days recovery time, the men’s team and Sophie started the Individuals events. As there were only 3 players in the Singles event, James Skelton assisted Jing Yi taking on some coaching roles. Paul, Owen and Sophie had some convincing wins in each of their groups and all 3 proceeded to the last 32. Zak finished with 1 win and 1 loss, narrowly missing out on the knock-out stage.

In the knock-out stage, Paul and Owen met tough opponents from India and Singapore and lost 0-4 and 1-4 respectively. However, Sophie displayed some outstanding performances. After some nail biting sets, Sophie beat Zhou Jingyi from Singapore 4-3, whom she never beaten in a number of previous encounters, to progress to the last 16. Then, after a long battle, unfortunately Sophie narrowly lost 3-4 to the no. 3 seed, Canadian Zhang Mo after taking a 3-1 lead in the match.

In the Men’s Doubles, another nail biting, marathon combat, Paul and Zak took on the no. 1 pair from Malaysia. The match was on the show court and broadcast live on the BBC. Support poured in from inside and outside the stadium, the boys did Northern Ireland proud, demonstrated tremendous effort, resilience and with an exceptional performance beat their highly ranked opponents 20-18 in the 5th set for a 3-2 victory. All players gave of their best and well done to them all!