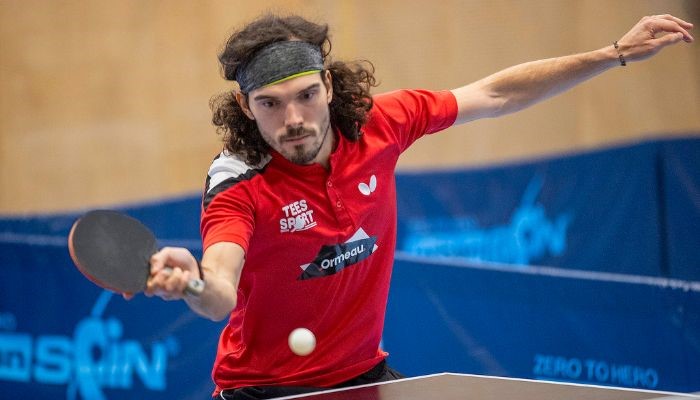 Paul McCreery was once hailed the ‘table tennis king of Ireland’ – these days, he claims he’s more of its elder statesman. McCreery is heading for his fourth Commonwealth Games in Birmingham this summer having been the face of Northern Irish table tennis since he was 18 years old.

With experience and talent on his side, the 30-year-old is taking on a slightly different role to the one he’s used to this time round. He said: “It’s my fourth Commonwealth Games and this one came as a bit of a surprise I guess. I think my role has changed a little bit so previously I would have led the team as the number one player in a sense, now my role is more of a leadership and team cohesion role. Our top male player, Owen Cathcart, will be leading the team whilst I will provide more of a mentoring role.

Obviously, I can still perform at a good level and want to win but I would say it’s probably a nice balance as we have quite a young team, so we have some really dangerous players which complements me and my experience being at the Games. The goal for us was that we reached the quarterfinals in the team event on the Gold Coast, and we have a stronger team now than we did then I would say, so the goal is the semi-final.”

McCreery relishes the fact he no longer must uphold the pressure of top player in the team but is enthused by taking on a leadership role. Team-mate James Skelton makes his Commonwealth Games debut aged 18, the age McCreery was at his first Games in Delhi 2010. And he hopes his experience and coaching background will aid the team both on and off the table – as well as future generations.

With the Birmingham 2022 Commonwealth Games set to inspire people and communities across the country this summer, McCreery hopes sharing his story will give others motivation to get involved in sport and turn their dreams into reality. He said: “I do quite a bit of coaching part time, so I guess I have a good perspective on what players need to do individually for them. It’s probably helped me understand the game a bit more holistically. I think it’s helped me to understand what’s the best to get out of other people and the team as well. And it’s a shift in perspective from being an individual athlete where you just prioritise your goals to guiding the team and providing some stability.”

This summer, Team Northern Ireland, supported by funding raised by National Lottery players, will comprise over 100 athletes, and having secured his place on the squad, McCreery and the team are looking for medal success. He is pleased to see that his sport has risen in popularity over the last few years and wants to continue its progression. And with the 2022 Commonwealth Games just across the Irish Sea this time round, Belfast’s best will extend a greeting to anybody who jumps into the sport. He said: “I feel like table tennis has grown a lot in publicity and professionalism globally. I think a lot of people are becoming a lot more aware of it and its presence as a high-performance sport and the level of skill involved in it and the pleasure to watch as well.

I’ve seen that more people are curious about table tennis. So, I’m excited to champion the sport and try and raise the profile of table tennis and show how great it can come across on TV and the level of work and skill the athletes have to undertake.”